Take a ferry from Sorrento

Ferry from Sorrento to Procida

Ferry from Sorrento to Procida

From the port of Sorrento you can easily reach Procida, with a short stop on the island of Ischia. From the Alilauro Gruson boarding area in Sorrento there are fast ships and ferries to Procida . While sailing to Procida, you will be able to admire from the ferry the mysterious charm of the Capo Miseno lighthouse and its wild nature. The island of typical pastel-colored buildings will amaze you with its fierce beauty.

How to get from Sorrento to Procida?

The Alilauro Gruson ferries from Sorrento to Procida depart from the tourist port of Marina Piccola. The port of Sorrento can be easily reached on foot from the historic center of the city by going down the steps or by taking the lift from the Villa Comunale. Alternatively, you can take a bus in Piazza Tasso to the tourist boarding area. From the Amalfi Coast you can get to the port of Sorrento via the SITA public buses, departing from both Amalfi and Positano. The port can also be easily reached using the Circumvesuviana trains that depart from Naples Central Station and arrive at the terminus of the Sorrento station, also crossing the archaeological area of Pompeii. Arriving by car, it is possible to park in one of the many public or private car parks near the port, with daily rates starting from 10 Euros. 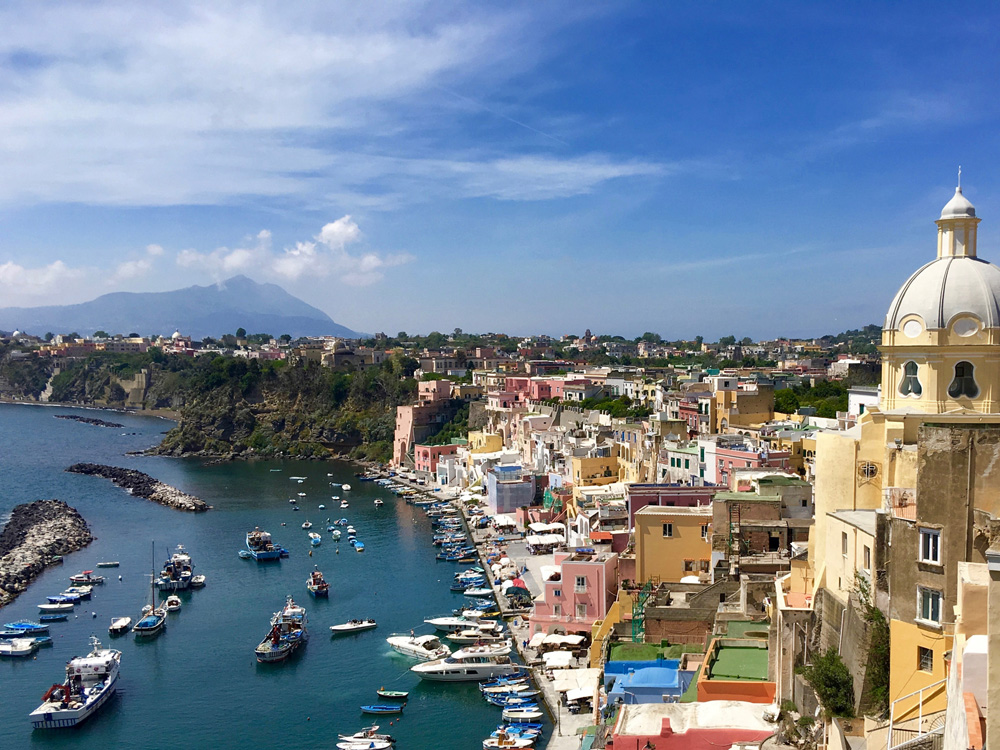 Ferries from Sorrent to Procida: the port of Marina Grande

The arrival point of all fast ferries from Sorrento to Procida is the tourist port of Marina Grande which is located in front of the former summer residence of the Bourbons, Palazzo Montefusco. As soon as you arrive at the Procida pier, you will be transported to a magical and timeless atmosphere. Walk towards Terra Murato, the charming old town overlooking the sea. You can move between the various points of the island using the public EAV buses. Four different lines serve the whole area and the rides are quite numerous. Alternatively, try one of the microtaxis, or the Ape Cars that will take you around the narrow streets of Procida.

Ferry and hydrofoil timetables from Sorrento to Procida

The first ferry departing from Sorrento to Procida is usually available around 9 am. Ferry rides to Procida are more frequent during the day, while those for the return are concentrated in the afternoon-evening. Check the timetable on our website to be always updated on the Sorrento-Procida ferry rides.

Price of ferries from Sorrento to Procida

The boats and fast ferries of the Sorrento-Positano route can be booked online on the Alilauro Gruson website at no extra cost. Usually, tickets for the single route start from 25 euros. Reductions are available for residents and accompanied children from 2 to 11 years old. Directly from the site it is possible to check the Offers section, to ensure the connection to Procida at a discounted price.

How long does the ferry ride from Sorrento to Procida take?

The travel time of the Sorrento-Procida connection is approximately two hours. However, some ferries make a short stop at the port of Ischia. During this journey you will be able to admire not only the beautiful Sorrento Coast, but also the Island of Ischia and its characteristic Castle. 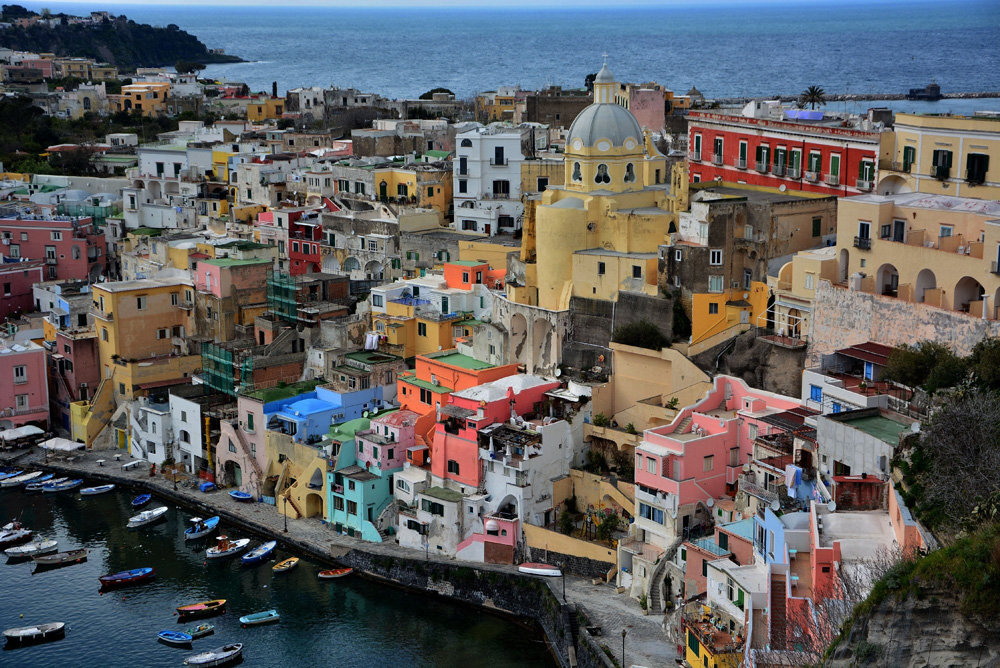 What to do during your stay in Procida?

Procida is a very small island, in fact it is possible to go around it almost completely on foot. The first thing to do is admire its colorful houses. From the port of Marina Grande go towards Salita castello, crossing the historic center. Enjoy the enchantment of the panorama from the Terrace of the two Cannons, and then continue to Terra Murata. Finally, visit the Palazzo D'Avalos. Do not forget the old port of Marina di Corricella, which will amaze you with its poetic views.

What to see in Procida?

Between naturalistic itineraries and enchanted places, here is what not to miss during a stay in Procida:

What to eat in Procida?

All that remains is to discover the excellent cuisine of Procida. In this section we present 3 of the dishes you absolutely must try:

Tips for trip in Procida

This year, every moment is perfect to visit Procida, as it has been named Capital of Culture 2022. There are numerous events planned and we recommend that you consult the website of the Municipality of Procida for more information, so you cannot miss any of the scheduled events on the island.

Do you need help?